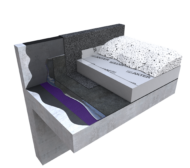 The first of its kind, Force Dalle is an innovative hybrid waterproofing system that combines the benefits of hot melt systems and advanced polymer modified bitumen membrane technology to create a unique and highly durable system that is a cost effective alternative to traditional hot melt. 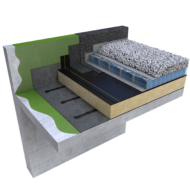 The Aquamodul blue roof sustainable drainage system is designed to attenuate, control and manage rainwater at source, providing attenuation capacity within the flat roof or podium deck construction of a development that can be combined with living roof, Solar PV and multi-functional mixed amenity finishes. 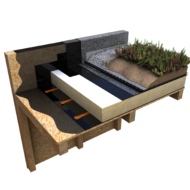 Extensive living roofs are primarily installed to provide a visual or biodiversity interest, and are less suitable as an amenity or leisure space.

This project was one of the largest schemes of its kind ever achieved outside of the capital, featuring the Aquamodul warm blue roof with our Force Dalle BBA approved system.

The roof attenuation rate required was 7litres/sec across the 6500m2, which is extremely low for such a large area, and the u-value of 0.10W/m2K was relatively demanding in terms of thermal performance. It was a project specific requirement that the roof was designed with falls within the slab in order to avoid any ponding water.

The design and implementation of a site wide blue roof ensured the development’s contribution to mitigating flood risk in the UK, supporting the protection of England’s waterways. Modelled over a 300 year period, the blue roof design is future proofed in terms of its provision for likely climate change and increases in predicted peak rainfall events.

Upon final QA inspection and integrity testing of the roof waterproofing works, the Aquamodul blue roof system, bespoke Hydrosoil Wildflower living roof and standard ballast finishes were installed in conjunction with a Solar PV array, which generated the majority of the building’s electrical energy requirements.