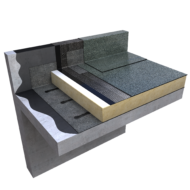 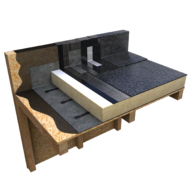 Reliable and ready to use, Starcoat R is a unique, single component polyurethane bitumen resin, with integrated anti-root protection.

This building was once home to the Henderson Garage door production facility, with the client in the process of renovating the entire premises to be split into several new warehousing and office units. To be able to secure new tenants, however, there was an urgency to stop a mass amount of water ingress into the building, due to the roof's years of neglect.

The state of the existing waterproofing was poor, meaning it needed to be stripped back to the metal deck below. Given the years of water ingress it was clear some areas of the substrate were deteriorating and would need replacing.

There was also an issue with the adjacent metal cladding to the perimeter of the roof space, one of which was coated in an asbestos paint and the potential for asbestos rope within the old rooflights. All of this needed addressing prior to the roofing works commencing.

Axter were called to initially survey the roof area, highlighting the main areas of concern and interface issues. Following a roof condition survey report, proposals were put forward as to how best to detail waterproof these areas and achieve the brief set out by the client.

To the metal cladding, Starcoat R cold applied liquid bitumen PU resin was used to create a waterproofed upstand without the need for the complete removal of the cladding. Upon discussions with the building owner, it was also discovered that the existing rooflights were no longer needed, so these were boarded over and waterproofed in line with the rest of the main field area.

The Hyranger system, comprising polyester reinforced SBS polymer modified bitumen membranes, was ideal for the job due to its guarantee strength, stability, performance and cost efficiency.

The completed roof gained a 20 year guarantee and extended the life of the building.